While Oahu, I also visited a place that the locals call “Turtle Beach.”

There is not a lot of sea grass or algae in the water for the sea turtles of Oahu to eat. However, on Turtle Beach, there are several rocks that are covered in algae.

Every day at low tide, the turtles slide themselves out of the water, and come up onto the rocks to eat.

I was always led to believe that turtles are really awkward on land. However, these turtles seem to have no trouble at all scooting around.

You could even see turtles that were not up on the beach playing in the waves.

The lifeguard on the beach sets up a barrier to keep people from getting too close to the turtles, and you can’t go swimming in the water directly in front of where they come ashore.

However, it is magical to watch them from behind the barrier and enjoy seeing sea turtles in a whole new way.

While in Hawaii on the island of Oahu, we went to a place called The Pupukea Maine Conservation District.

Within that area, there are a few places that you can snorkel.

We initially tried to go to Waimea Bay, because we had heard good things. However, there was no parking.

Instead, we followed the road a little farther, and parked in front of the Kalua O Maua, or “The Three Tables.”

I was really glad that we ended up where we did, because we saw so many green sea turtles!

Turtles are one of my favorite animals, and I adore sea turtles. There is one back home in Guam that I love to go visit.

You do have to be careful. The waves are strong, and it would be easy to get pushed into one of the “three tables” (which are just big pillars of volcanic rock.)

They aren’t sharp, but they are full of baby sea urchins, so you wouldn’t want to touch the rocks. 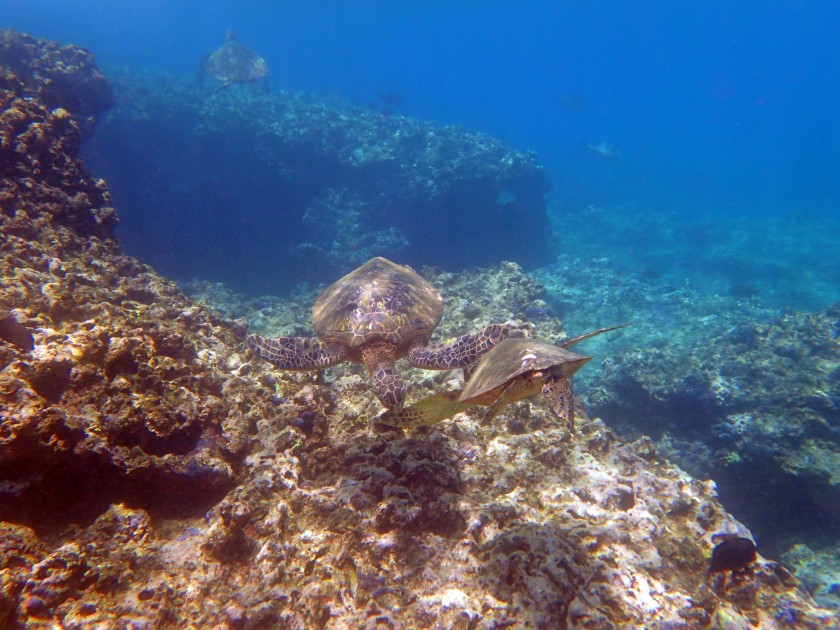 However, as long as you are careful, there are a lot of really beautiful things to see. There are some flat corals, and lots of fish.

The turtles looked a little worse for wear. Quite a few of them had shell of flipper damage.

However, they were reasonably calm around us. We didn’t get too close (obviously) because of the restrictions in the endangered species act.

Seeing them from a distance and being able to zoom in and get video was pretty magical, though.

The waves were high, but the water seemed calmer than on the other side of the island.

There were certainly more people swimming, and we didn’t see any dramatic rescues of screaming people like at Electric Beach.

I recently went through Hawaii on my way home to Guam. We were only on Oahu for a few days, but Electric Beach at Kahe Point was one of the best things I saw.

You park across the street from the Power Plant, and then walk past the bathrooms onto the small strip of beach.

There are a lot of signs on the cliff side as you walk down, warning you of the dangerous water conditions.

There are also signs on the little strip of beach, telling you not to go in the water in front of the power plant.

The signs have a point. What you want to do is go to the ramp, and swim straight out from the ramp for about 200 feet. Then, bear to the right just a little. 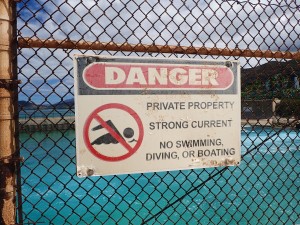 There are pipes (that are buried) with some coral on top. Follow those out.

You can see the bubbles from where the pipes let out.

The water from the power plant is warm, and it attracts a lot of different sea life.

It’s important to be careful. If you get down in front of the pipes, the rushing water will push you out to sea and you will have to swim back.

The best place to be is right before the opening of the pipes, so that you can watch the animals that come to hang out.

We saw lots of amazing things, including a black trigger fish and several schools of baby fish.

Of course, the best thing we saw was a sting ray, which hung around and played in the water with us.

However, there were all kinds of things to see. The are pillow star fish, sea urchins, trigger fish, and much more.

If you stick your head out of the water facing shore, you can see the power plant. This is what it looks like.

And the best part?

When you get out, they have showers!

If you snorkel often, you know how awesome that is. I hate having to drive home salty.

Again, I should caution you about the dangerous waters.

We saw some people get caught in a rip tide and pulled into a rocky area. They had to be rescued.

Make sure you are a strong swimmer before you try Electric Beach. 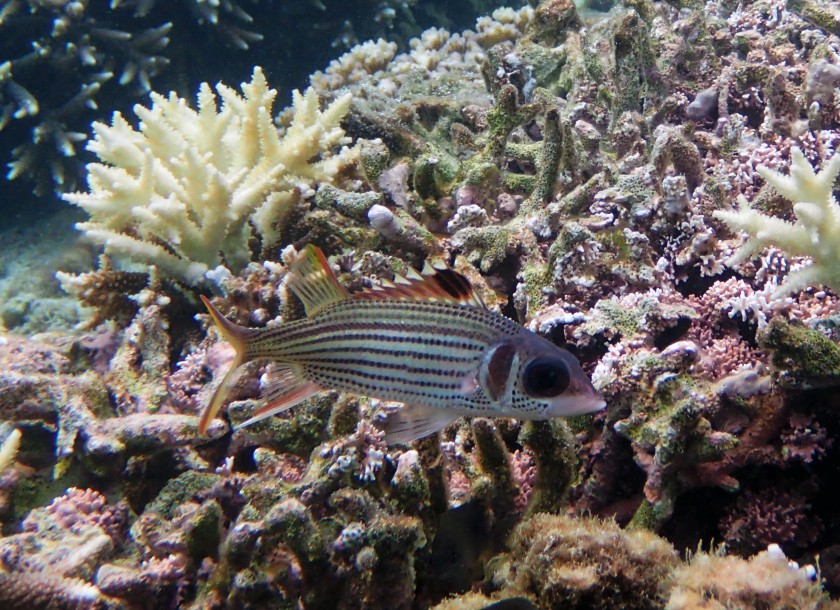 This is just some of the coral beaching that I have seen around Guam. 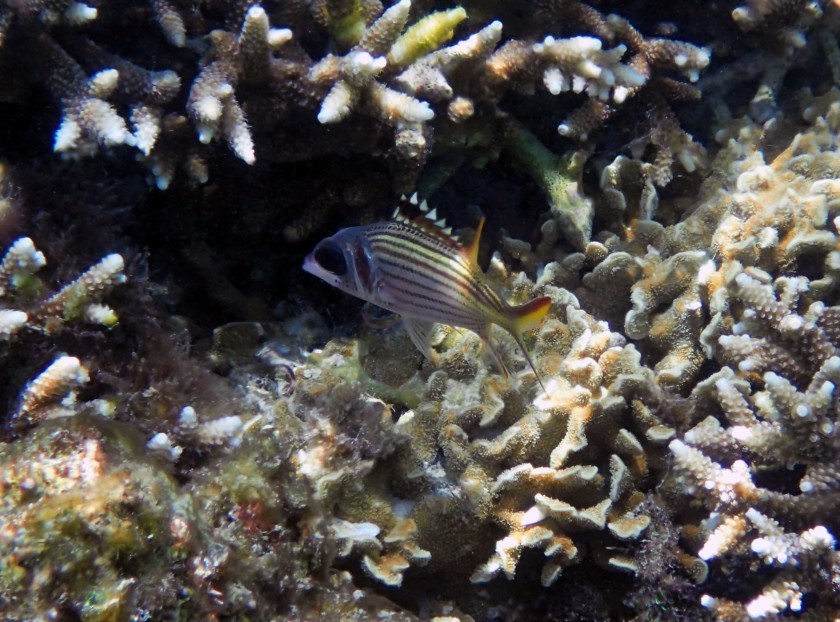 I am trying to let NOAA and UOG know. 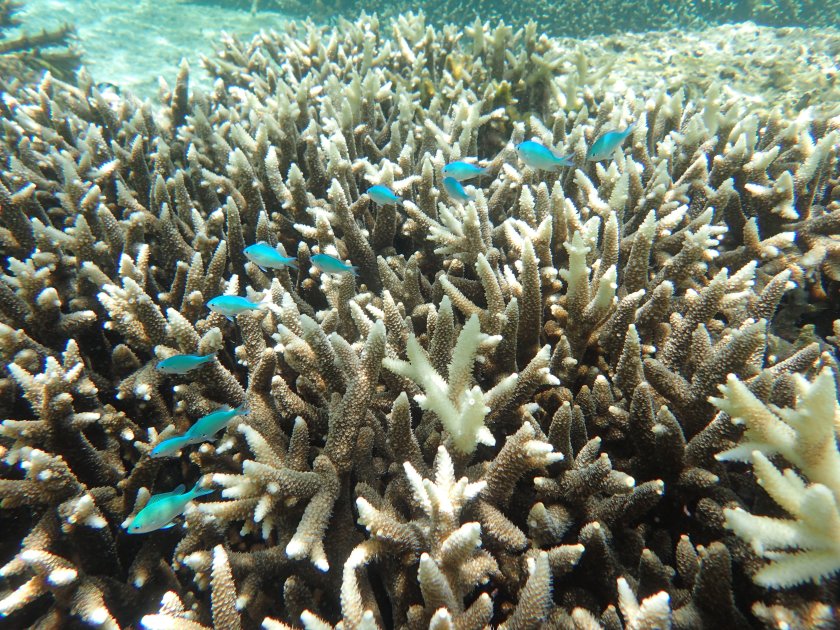 It won’t help solve the problem, but it will help document what is happening.

Maybe I find documenting it comforting because at least I am doing something.

It’s not a something that fixes anything, but it’s something.

If you know anyone in Marine Biology, make sure to pass this information along to them.

Healthy coral has color to it. In the picture above, you can see healthy coral thriving at Gab Gab reef on May 2nd, 2017. This is what it is supposed to look like.

Unfortunately, the coral around the world is dying, and I want to talk about it for a moment.

Coral is made up of many tiny animals called Polyps.

These little animals have specialized chloroplast cells inside called zooxanthellae. These chloroplasts absorb sunlight and convert it to food for the polyp. Without them, a polyp will die. 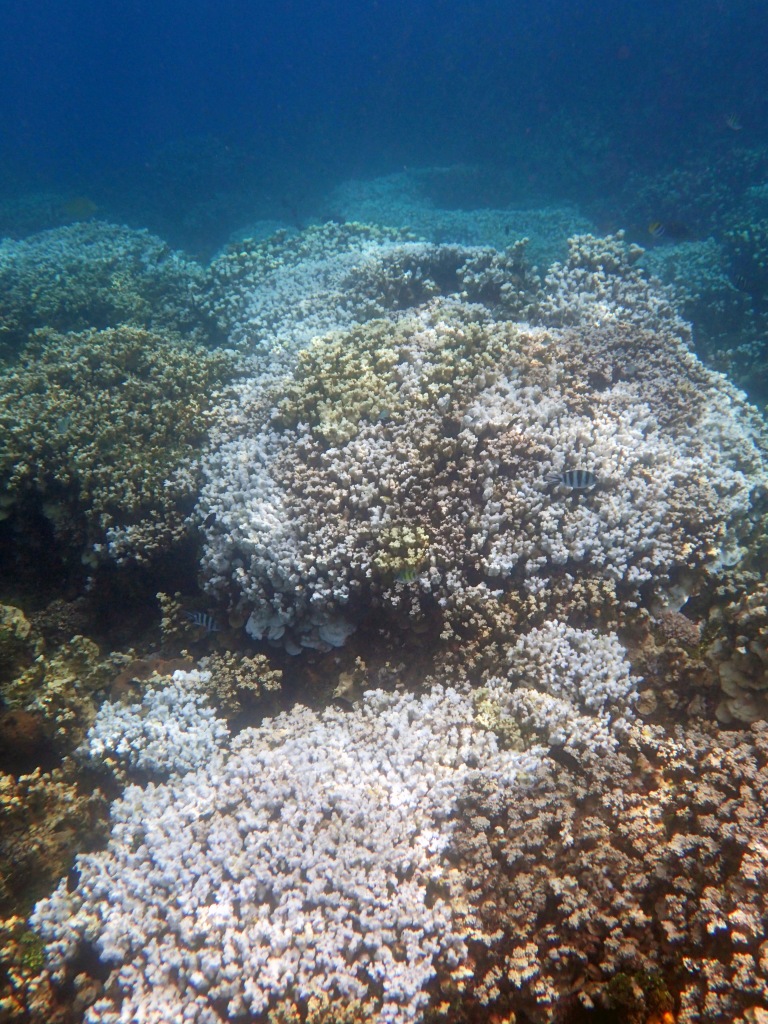 When the water temperature in an area gets too hot, the zooxanthellae stop being able to work. They are sensitive to temperature, and so they die. 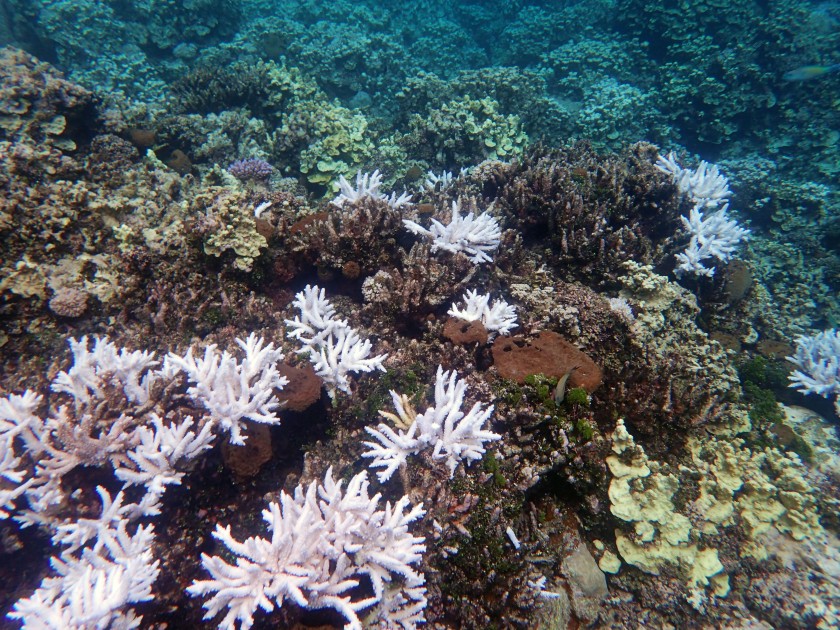 The reefs on Guam are bleaching. This is part of a worldwide event, which is being driven by climate change.

I wanted to share these pictures and videos in an effort to draw attention to the fact that this is happening, and how awful it is.

These pictures are taken at Gab Gab, just like the one at the top of the page. The difference is only a few months, but the difference in the temperature in the water is extremely noticeable.

Before, it used to be a little chilly when you first got in. Gab Gab is a reef that goes from the surface water level down more than one hundred feet. Deeper water, in my experience, tends to be colder.

And yet, yesterday when I got in the water, it was hot. 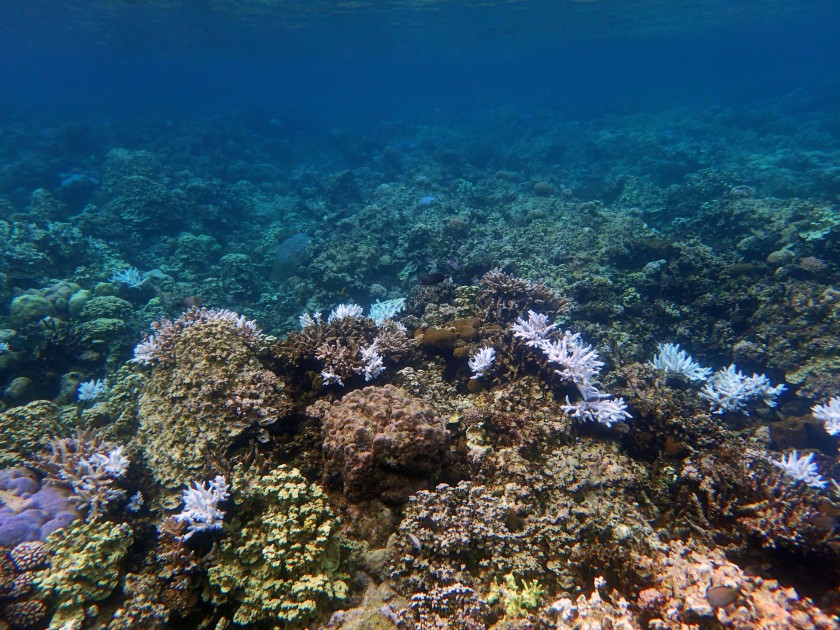 I beg you all to take a very close look.

I think a lot of people who have never been snorkeling or diving are able to easily ignore the bleaching of the corals and the dying of the reefs.

For me, living here, it is much harder. 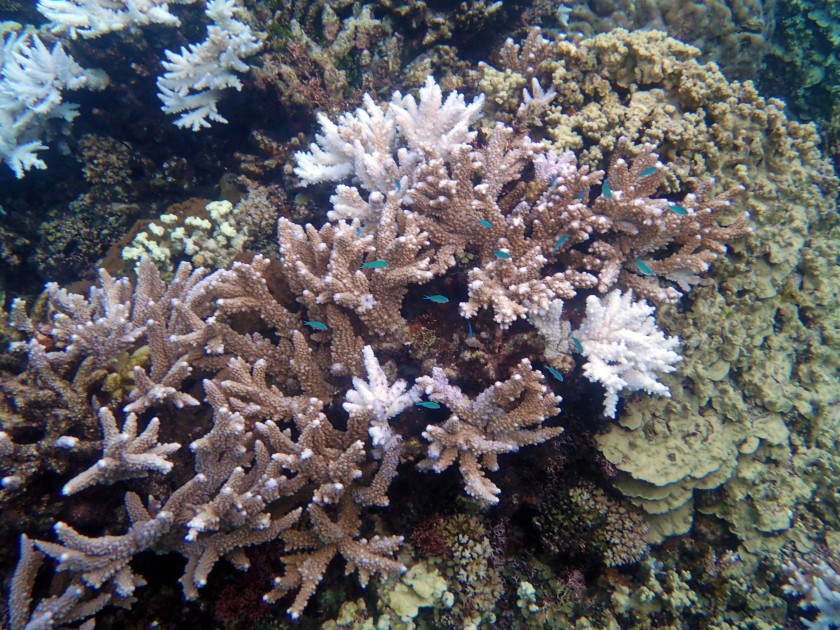 Coral are home to thousands of species of animals, and as they die, those animals will also die.

The diversity of life that we had in our oceans was amazing, and losing it is absolutely horrifying.

I have no words beautiful enough or sad enough to write the eulogy for our oceans. Nothing said or written could capture how beautiful this reef was just a few months ago.

Seeing the reef now as it bleaches and dies is one of the most painful things I have ever seen.