Most of the hikes on Oahu are a bit off the beaten path, but Diamond Head hike is not. It’s located in Honolulu, and it looks out over the resorts and the downtown area.

You drive up and pay $5 per car to park. You’ll get a ticket to put on your dashboard and a map of the park.

At the entrance, there are bathrooms, a gift shop, and a pineapple stand (where you can get those fancy drinks in pineapples that everyone always has pictures of.)

Then, you start up the trail. It’s a brutal hike in the summer because it’s very steep and crowded. However, it’s not as difficult in the winter. I still recommend bringing water and sunscreen, though. 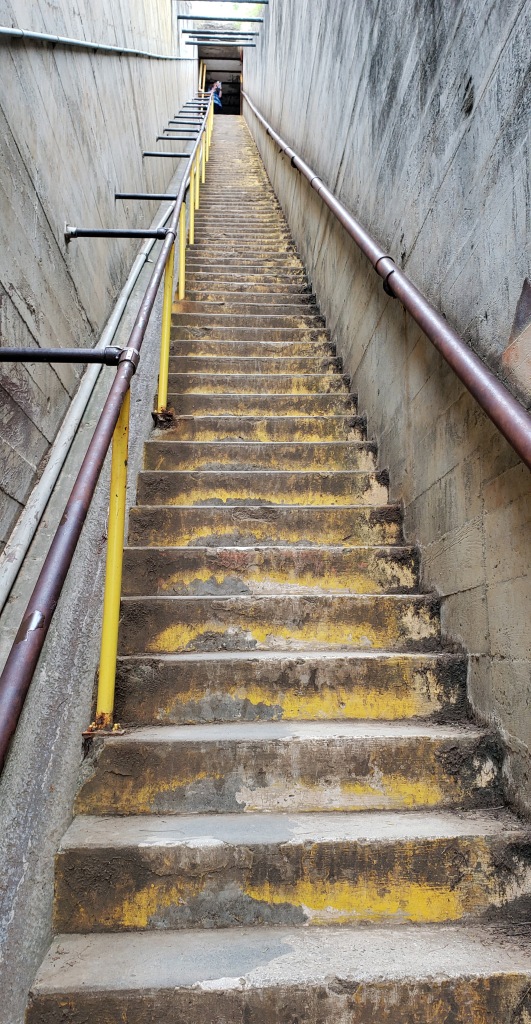 The trail wraps up along the wall of the crater, and takes you through a very narrow tunnel.

At a lookout halfway up, you can choose to continue back into the tunnel and do a spiral staircase to the top, or take metal stairs that are outside.

I recommend the metal stairs because being crammed into dark and narrow tunnels with lots of people isn’t my idea of a good time.

From the top, you can see Diamond head lighthouse directly below, as well as Honolulu on one side and Koko head on the other side. 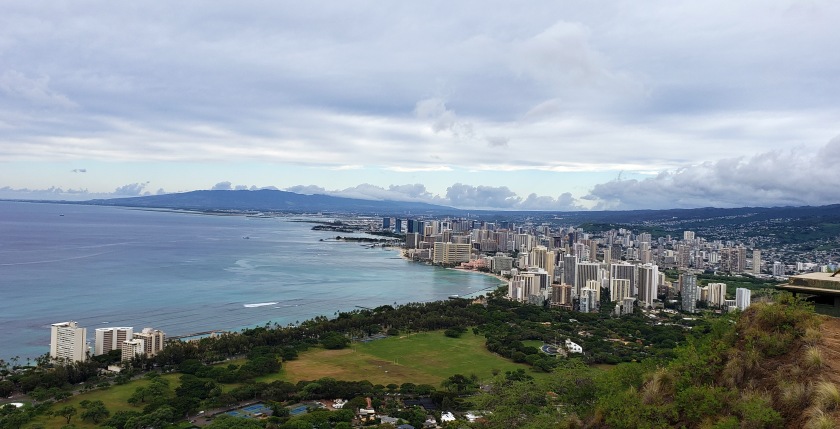 The sweeping views are pretty amazing for what is a fairly short hike. I did it at sunrise, and it only took me about half an hour. 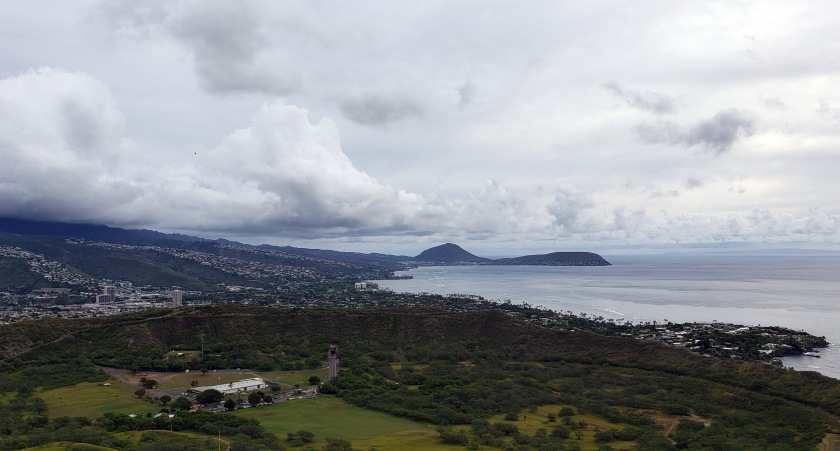 In spite of the crowds, it’s a nice little hike. I recommend everyone do it once.

If you are already doing the Makapu’u Lighthouse Hike (which is amazing,) you might also want to take the dirt path from the parking lot over to the coast.

It’s a dry walk, and it was dusty in June. I recommend lots of water, and possibly a snack. On the upside, it’s not a hard walk because it’s completely flat.

Sometimes the locals go there to fish, so beware of stray hooks and lines. Also, remember that the waves break on the rocks! Keep your distance. People are sometimes swept off the ledges, and the sea is very rough in this area so you could get seriously hurt.

It’s really more about sitting at a safe distance and watching the waves splash over the rocks. I went at low tide, so I managed to see a few fish and some crabs.

That was fun, but I was very wary of not stepping on any wet rocks. If the rocks are wet, waves are probably breaking on them. So, steer clear of wet rocks.

Overall, it’s worth the walk if you’ve already done the lighthouse hike and you have some time leftover. However, I wouldn’t brave the crowded parking lot just for the coastal area, because there are prettier places on Oahu that are less crowded.

When I heard about Makapu’u lighthouse, I thought it was just a trail with some ocean views and a lighthouse. I had no idea how spectacular it really is. The ocean views are amazing and varied, and it’s a big pay off for a very easy hike.

Let’s start at the beginning: The gate to the parking lot opens at 7:00am. That’s the best time to go, because otherwise you will have to wait for a spot or try parallel parking on a busy highway, and neither of those things are much fun. I recommend getting there right when the parking lot opens.

This hike it always busy. As far as I know, it’s the only paved trail in Oahu so I can see why it’s crowded. It’s an easy hike, you don’t have to worry about mud or bugs, and it’s really a very short climb.

Once you park, walk to the trail head. You’ll see a dirt path going off to the right. It takes you to some rather unimpressive rocky beaches, but you may as well check it out if you have time. Bring lots of water, though. It’s hot and dry on that path.

The paved road goes straight up, and that is the Makapu’u lighthouse trail. There are no bathrooms, so stop somewhere before you hike. There are trash cans though, so you have no excuse to litter. As you walk up, stop at each of the vantage points and read the signs that tell you about what you are looking at.

When you get to the top, you can look down on the lighthouse. Unfortunately, the trail to the actual lighthouse is closed to the public because it’s very dangerous. However, you can see it from the side as you climb the trail, and then from above when you reach the top of the trail. Hopefully that’s enough to satiate your desire for lighthouse views.

Personally, I think the vistas of the South coast and the East coast of Oahu are far more exciting that the lighthouse. They’re well worth the short climb.

Note: There is also a sketchy path along a dirt cliff that goes to tide pools (from the whale-watching lookout,) but I wouldn’t recommend that unless you are an advanced climber. Even then, in my opinion, the payoff of a few small tide pools isn’t worth the risk. You can see better tide pools at Ka’ena Point without putting yourself in any danger.

The hiking conditions on Oahu change considerably depending on how much rain we got the week before. Sometimes the ground is solid and it’s just a nice walk. However, if there has been rain, the mud gets deep and sticky. Don’t wear shoes you care about. 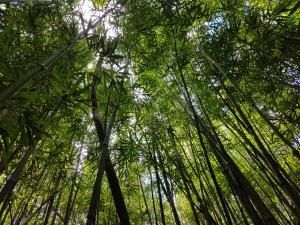 This hike was difficult for me at sunrise because there was no one else around and I went off on the wrong trail a few times. I think that if you go for your first time, you should go later in the day when you can follow the crowds.

The bamboo forests along the way are spectacular, and a lot of the trail is along a stream, which is wonderful. It’s a lot of climbing over rocks and winding through trees, but it’s also pretty flat and chill compared to other hikes I have done. There’s not too much up and down. 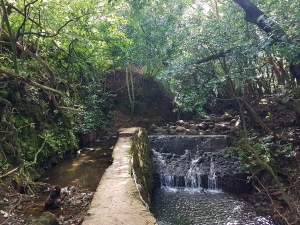 The hike is long enough that I would recommend you bring a snack and about a half gallon of water. There are mosquitoes (since it’s along the water) so you should probably bring some bug spray. Other than that, you shouldn’t need much.

I should mention that the parking (across the road from the Pali Lookout) is separated from the trail by a fence and some signs about keeping out unless you’re hunting. But, there’s a break in the fence to the right of the parking lot (facing the fence from the parking.) Just go through there.

It’s not like the Stairway to Heaven where you’re likely to face a fine if you get caught doing it. The only issue is if you go onto the military land, which you would have to get WAY off the path and sneak through a second fence to do.

Likeke Falls is pretty cool, and I definitely recommend it.

As you know, I’ve moved from Guam to Hawaii and I’m trying to learn about the island. The hiking here is so much nicer because it’s not tropical heat all the time. It’s cooler and there are breezes. So he’s some stuff about Manuawili Falls.

This is another hike that has a lot of mud if its been raining. It’s along a river, so there’s even more swampy areas than on the Likeke Falls trail. You definitely want bug spray. 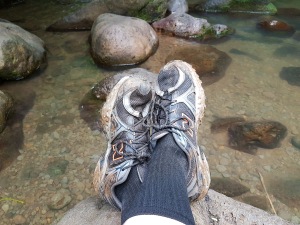 Go early. Drive there when it is still dark, and do the hike right after sunrise. This is because there is no parking lot. You put the name of the waterfall into your GPS, and it takes you to a trail head in a neighborhood. The little bit of street parking that is available goes very quickly, so you want to be the first one there.

In addition, this trail is pretty clearly marked except for the first part. First you walk along a raod and come to a sign that tells you to go up into the trees on a small path. Do that. Then, you go up beside a road, and it seems like you should go down onto the road. But, you just keep going straight into the trees and over the hill. Then you’re on the trail. It’s easy to follow it from there.

You will notice little paths going off from the main trail. Those are formed when it’s VERY muddy and people walk along the side to avoid sinking in to the mud. They all join back up with the main trail, so no worries about getting lost. 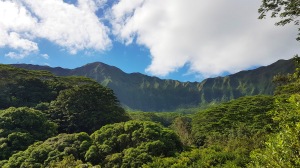 In the end, you’ll get to a river again, and have to cross one more time and then do some rock hopping. I recommend either bringing water shoes in your pack, or just wearing them the whole time. Because, for the last part, your feet are probably going to get wet. 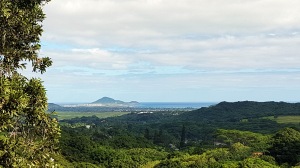 When you finally get to the waterfall, there is a pool to swim in. If you want to swim in it, bring a towel and try not to get it in your eyes or swallow any. People have been known to get leptospirosis on this hike because rats, wild pigs, and other animals urinate upstream and the bacteria stays in the mud and water. So no barefoot hiking, and no swallowing the water.

It’s a pretty place. I just sat on a rock and watched the water for quite a while. Since I did the hike early, I was the only one there and I had the place to myself. I hear that later in the day it really fills up.

On the way back when the sun came out, I got to enjoy the views more. It’s almost as amazing as the view from the Pali lookout, and it looks over the same part of the island (towards Kailua and the Marine base.)

It’s a harder hike than Likeke Falls because it’s full of stairs. Bring a snack and a half gallon of water, and definitely be ready for mud.