I went to London on a whim while I was on vacation in Paris. It was an inception style vacation within a vacation.

Really it was because my cousin Stacy Spence was going to college in Cardiff, and she agreed that if I took the train over from Paris, she would meet me in London and show me around.

We did a tour where you go around in a bus and stop to look at things, which was really lovely.

Naturally we stopped for Fish and Chips in a pub as well, because I insisted. I had it with a pint of beer that our bar tender recommended.

Honestly, they were not the best fish and chips I ever had, but we’ll leave that to it being a pub outside St. Pancreas Station and not a five star resort or something. 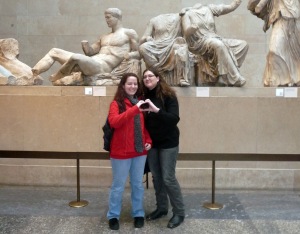 I have to say that the people were nice. When we got lost, my cousin asked for directions to the British museum by saying “Where is that building full of things you stole from other countries?”

Not only did the boys she asked have a good sense of humor about it, but they walked us over to the museum to make sure that we got there okay.

This is not the cold and unfriendly England that folks warned me about, but I guess maybe that’s just how they want us to see them, eh? 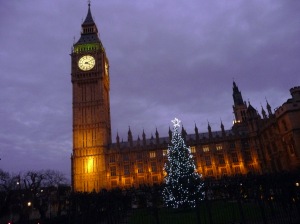 Anyway it was really, very nice. It’s made me want to go back for a proper look when I have more time.

Until then, cheers London! You’re beautiful!