The Leeward Coast of Oahu gets a bad reputation because it is the desert side of the island, and so it’s not as pretty on land as it is on the rainy side.

However, I think this reputation is undeserved. The water is always calmer there, and the visibility is always better because there is less sand and more rocks (so sand doesn’t get kicked up into the water.)

You can find Electric Beach by putting Kahe Point into your GPS. However, this will take you to a park which is the second left after Ko’Olina. You want the first left after the 93 passes Ko’Olina and joins the coast.

You will know you’re in the right place because you’ll see a power plant coming up on the right, and a small building (which is bathrooms and showers) on the left. 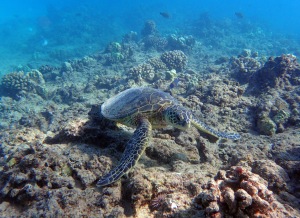 Once you park (get there early or it will be full) you walk down to the small patch of sand just past the bathrooms. Sometimes the waves can get kind of high, but it’s fine once you get past them.

Swim out and slightly to the right. You’re looking for the line of rocks that are piled along the bottom. You want to follow them.

At the end of the rocks are two HUGE pipes. Warm water from the power plant comes out of these pipes. Fish love this, and so do things that eat fish!

I’ve seen a sting ray and lots of turtles, but people have told me that they saw dolphins, and other larger sea life. 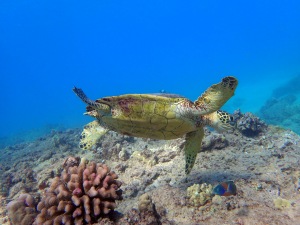 For those who are afraid: Remember that sharks are nocturnal so you’re not likely to see one during the day. I’m telling you this because when I took my friend, she heard “lots of fish and things that eat fish” and she immediately got worried about sharks.

Sharks are terrified of people and they don’t want to hurt you. They do bite surfers sometimes, but that’s only because a surfboard looks like a seal from underneath and they think they’re seeing food. They have historically always let go once they realized they didn’t have a seal.

So please, don’t be afraid of sharks.

This is the view looking back towards shore from the pipes. You probably won’t be the only snorkeler there since it’s a cool spot. It’s often kind of busy. 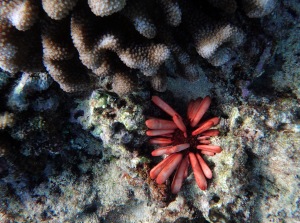 Anyway, always be careful and don’t swim out past the pipes because the currents are too strong. Check the weather to make sure there are no storms coming, because rip tides get stronger when a storm is coming, and it can get pretty dangerous on all the beaches when that happens.

Be safe and have fun! 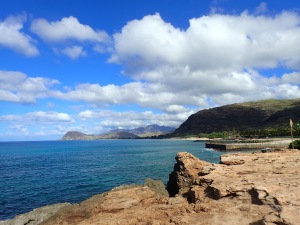