I’ve already written about Shark’s Cove, which is part of Pupukea Nature Preserve. The other side of this park is called Three Tables, due to three flat rock formations out in the water.

This is a great place to go snorkeling between April and September. I don’t recommend it in the fall or winter months because the surf is too high. If you’re not sure, you can always check Surfline Oahu for updates on how high the waves are. 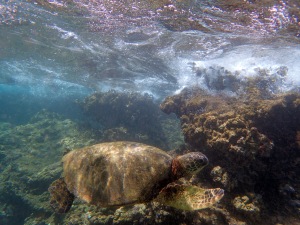 You want to be careful not to get too close to the rocks in Three Tables. People sometimes get smacked into them by a wave, and this can be bad because there are sea urchins hiding inside all the cracks in the rocks. It hurts a lot more than you might expect to rub up against them.

However, if you keep your distance from the rocks, this is a nice place to snorkel because the turtles come eat algae off the rock formations. You can get a front-row seat to watching them munch; though it’s challenging to get a good picture because the water is so churned up.

This is also a great place to see schools of surgeon fish, and octopus. It’s fairly sandy at the entry point, so you don’t need boots. However, it’s not as deep as the Shark’s Cove side, so I don’t recommend it for divers.

The sand is round on this beach, which means you really sink into it. I’d keep your towel up in the trees or over on the rocks. You wouldn’t want it to be eaten up by the sand. Even if you’re not going in the water, this is a lovely beach to just sit on and relax. Pupukea is beautiful, and Three Tables is the best spot to enjoy it. 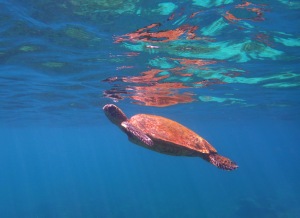