If you’re looking for a nice way to spend a morning on Oahu, Waimea Valley is lovely. I originally went because I had heard that you could see a waterfall. However, I soon discovered that there is a lot more to see and do in Waimea Valley.

Upon arrival, I parked in the lot in front of the park. Thankfully I arrived early (at 9am,) so there was parking available. Later in the day, you may have to wait until a spot opens up.

I paid my $12 (price for anyone with a Hawaii state ID or military ID.) The clerk gave me a map and a bird identification guide; as the garden is visited by many types of birds. Full price would have been $18, in case you are visiting as a tourist.

I opted not to spend the extra $15 for the shuttle, as they said it wasn’t a long walk. Now, “long walk” is a relative term. Folks with heat sensitivity, chronic illnesses, children, or elderly people should definitely consider the shuttle. It’s hot and humid in the valley, and there are several steep hills.

However, if you are young and healthy, then I would agree with the park staff that it is a short walk.

I had no idea that in addition to have a waterfall, Waimea Valley is also a botanical garden. The park features plants from all over the Pacific, and even has some plants from Guam!

There is a main path to the waterfall which is clearly marked with signs, and most people opt to take that path straight to the waterfall. However, there is also an upper terrace with even more plants, and a walkway through a wetter area by a stream that is filled with ginger.

If you have time, it’s worth the detours to see all the tropical plants. The garden possesses labels for common plants (in green) and detailed descriptions for some (in blue.) There are also some plants which are critically endangered (labeled with red.)

Since the garden has so many rare plants, they do not allow smoking in the park. They also discourage feeding the animals, since many of the birds that are attracted to the garden are also threatened or endangered.

As always, stay on the path. So many tourists want to get a picture in that special spot in the jungle, but this can damage the plants that you must step on to do so. Be a good steward of the Earth, and only go where permitted.

As for Waimea Waterfall, it is sacred to the Hawaiian people, and it is said to have very special qualities. Hawaiians believe that soaking in the pool below the fall can cure ailments and promote good health.

As such, you can expect the pond to be full of people throughout the day.

A changing facility is provided, as well as lockers. It’s required that you wear life jackets in order to swim, but you may check them out from a stand next to the falls. There is also a sitting area to rest and wait, in case some of your party do not wish to swim. 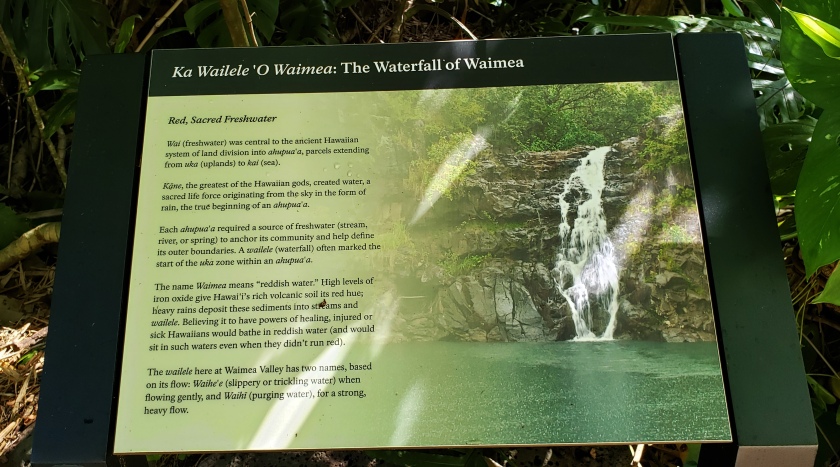 I didn’t go when the park was closed or get special access. I just Photoshopped the people out of this picture (below,) so you can see the waterfall in its natural glory. You should be aware that, unlike my pictures of Guam, none of my Oahu pictures ever start out without people in them.

This is a very crowded little island.

When I moved here, I debated keeping the people in the pictures, but I decided to remove them for two reasons:

First, I don’t have their permission to post them on the internet, so I don’t think I should.

Second, it’s nice to see these places as they would look without people. If you want to see how they look when they are crowded, all you need to do is go there yourself.

I think it’s wise to set aside an entire morning for Waimea Valley. There is a lot to see. One of the things I always have to remind people to do is to look up. Any time you’re in a jungle, you’re likely to see just as many amazing things above you as you will see in front of you.

Along the main part of the path, the trees that grow there exhibit a phenomenon called “crown shyness.” This means that the leaves will grow right up to each other, while leaving a space between them.

Scientists are not sure why trees do this, but it makes for some pretty amazing pictures.

Another thing you should always keep in mind in the jungle is to look down. This (below) is a bean slug. They are unfortunately not very common, as many people use pesticides to kill them. They are voracious eaters, and can consume your garden plants in short order.

In spite of their designation as a pest, Hawaiian slugs are pretty neat. Many of them possess a harder exterior than other slugs, and flatten themselves out in a way that I haven’t observed elsewhere.

So, remember to look on the ground and in the leaves. You never know what you’ll see in the jungle if you look closely.

One last thing to keep your eyes out for as you make your way through Waimea Valley: This fabulous joke (below.)

As I’ve mentioned, there are signs all along your way to tell you about the many amazing plants that you can find in the valley. However, I also came across this sign, labeling a wild value. I had a good chuckle about it when I spotted it, and hopefully you will too. 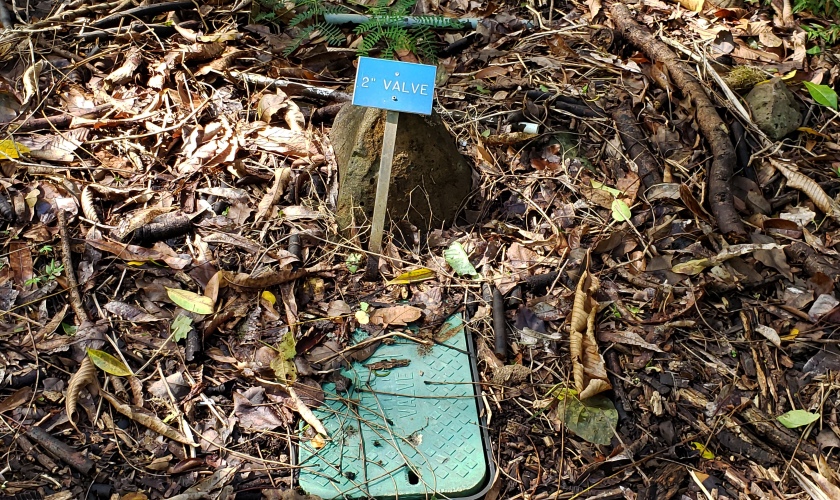 Finally, Waimea Valley does living culture exhibits, and has ancient ruins as well. If you wanted to learn a little about ancient Hawaiian culture, this would be a good place to do it. After all, it’s far more affordable than the Polynesian Cultural Center, and there are lots of cool things to read about.

If you take the side tour into the area with ancient Hawaiian dwellings, a series of plaques will tell you all about how the ancient Hawaiians used to live, and how their culture was structured.

If you’re visiting our island, this little gem might not make your list. However, if you live here, you should absolutely make time to visit.

The many ponds and water features do ensure a humid experience, but it’s still worth going in the summer when all the food trees are laden with wax apples, star fruits, and other island favorites.

There are many daily activities available, so call ahead if you want to get involved in lei making, hula, ukulele, cultural and botanical tours, Hawaiian games, or crafts.