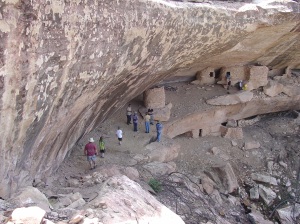 Before there were Blackfoot and Navajo and Ute, there was the Anasazi. Current Native American tribes recognize the Anasazi as their ancestors; though no one is sure of exactly what happened to them.

Once, they lived in fabulous cliff palaces like the one pictured above. After this, there is no history telling us of them except for current tribes calling them ancestors.

As for me, my great-great grandfather was a man named Richard Wetherill. He fought to preserve the Anasazi cliff dwellings for future generations, and so there is something of my ancestry in the park as well.

In fact, that is what brought me to Mesa Verde. I went as their invited guest for the 100 year anniversary of it becoming a National park.

Sadly, my great-great grandfather didn’t live to see the land designated for conservation.

However, park officials credit his letters to Washington and the collections of artifacts that he sent to the Smithsonian as the reason that Mesa Verde is a protected area today.

Richard Wetherill was primarily a trader and rancher, and his fight for preservation of land was a hobby for him.

As a child, I didn’t really know any of that. I just remember the Navajo blankets in our home, and I remember hearing the stories about coyote and the other tricksters from Navajo legends.

As an adult, I have to say that I am pretty proud of his work fighting to preserve land for the future. I have always felt strongly about conservation, and so national parks are a favorite thing for me.

In addition, I hope that we can all agree that leaving our history for our children and grandchildren to see is valuable.

That’s what is so wonderful about Mesa Verde, because it is preserving land and history at the same time.

I hope you’ll all go to Colorado and see the park some day. It really is breath-taking. 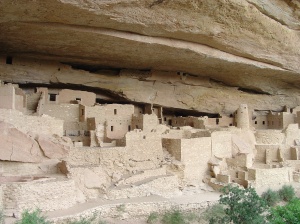 In fact, even the drive there is impressive.

People miss a lot of the most wonderful things in the US by flying over the land. But, if you drive across it, you really will see some amazing things.

Just a tip from someone who has been all over the west coast, and seen some pretty dramatic scenery along the way. 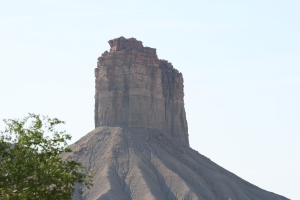